This article was originally posted by Alison Carroll on The Conversation.

They talk of a family of nations, or families of nations. In Australia, the UK can still be referred to as the mother country, while the English talk of their American cousins. Geographic neighbours usually have these relationships down pat, though with a frisson of sibling rivalry or pecking orders of favouritism.

However, one of the truths about Australia and Indonesia, so physically close, is that there is pretty well no familial relationship at all. It’s like we are different species.

I think this is central to the on-again, off-again, try-hard, well-meant, scratchy relationship that struggles to get to first base, always slipping back into the no-man’s-land of “it-is-all-too-hard” and “who-cares-anyway-ville”.

I recently listened to an ABC RN arts program on the Contemporary Worlds: Indonesia exhibition, now at the National Gallery of Australia, where the announcer spoke of Australian artists travelling to “New York or Berlin or London” with no instinctive, familial thought that, just maybe, travelling to “Jakarta, Singapore or Tokyo” might also be part of the mix.

Zico Albaiquni, For evidently, the fine arts do not thrive in the Indies, 2018, oil and synthetic polymer paint on canvas. Courtesy of the artist and Yavuz Gallery, Singapore

Indeed Contemporary Worlds: Indonesia could be from outer space. Despite 30 years of close contact with Indonesia by Australian curators and artists; despite goodwill and a lot of government rhetoric about the “importance of the relationship”; despite so many exchanges and residences and lectures, the nuance is still irredeemably “other”.

I’ve been involved in arts management training programs in Indonesia, curated exhibitions (from 1990, when I organised Eight Views at the National Gallery in Jakarta), been behind the Asialink Artist-in Residency program in Indonesia, served on the Australia-Indonesia Institute (pushing always for strong, intelligent, meaningful arts programs to be supported) and I still see Australians not able to catch Indonesian names, or artists, and hold them as important. Teaching of Indonesian language is struggling; academic inclusion of Indonesian cultural material remains minimal.

Yet Indonesian art was and is great. This exhibition shows many of the reasons why: it is fresh, energetic, human, performative, warm, serious, funny, clever, sensitive, political and not political. 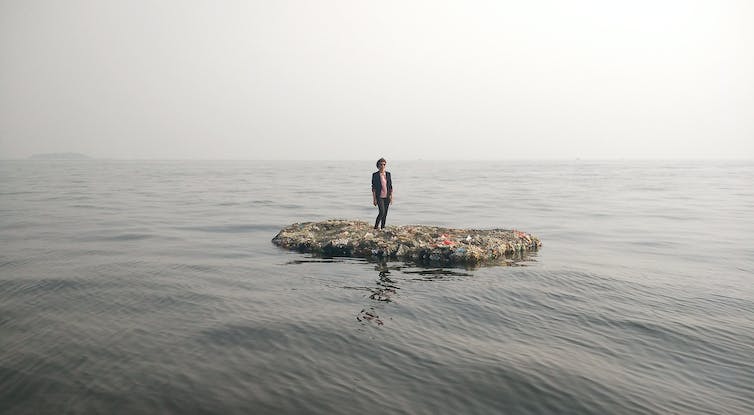 There are many wonderful works: Tita Salina has built a raft of rubbish that she rides into Jakarta Bay (shown here as a video), a totally pertinent comment on pollution, but also beautiful and elegaic.

Yudha “Fehung” Kusuma Putera dresses and photographs motley groups of people and animals in cloths that distort their forms – out of it comes humorous but pointed comment on what we are.

Mella Jaasma’s work is classy as usual: a video of a Sufi dancer outlined against the sky, twirling his skirt made of mock Mooi-Indie (“beautiful Indies”) sentimental colonial landscapes. His trance-dance is a comment on humanity’s capacity to seek and find inner strength despite fake news – current and past.Eko Nugroho’s graphic work based on popular culture is relatively well known in Australia, but here he blows three-dimensional air into his usually flat cartoon forms, which then seem about to waddle off down the street.

And then there’s Entang Wiharso’s just wonderful magic house made of cut metal (but it could be of lace cobwebs), lit by a chandelier. It throws shadows to the walls like any self respecting environment for the flat, back-lit forms of wayang puppetry, though on closer inspection the cut forms are illustrations of the artist’s life and world, totally of this day.

This is some of the art of the archipelago. It is an art scene as lively as anywhere and both this and the art is increasingly recognised around the world as being a hot spot of creative energy and interest. Why do Australians not know this? 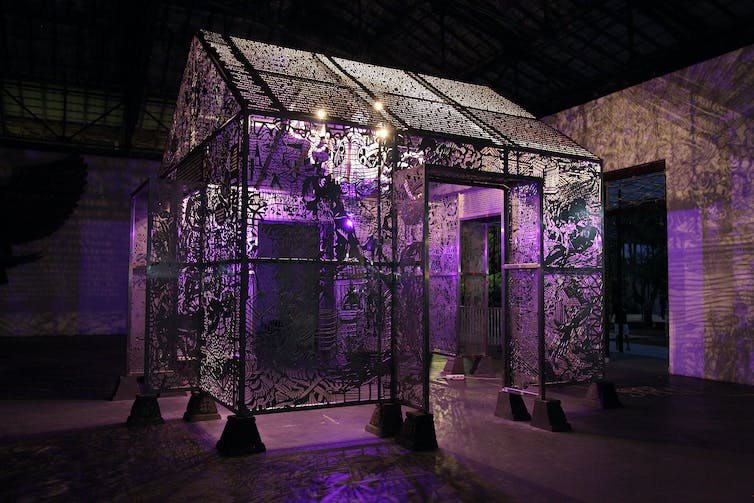 We have had heaps of opportunities, yet this exhibition in Canberra is the first ever of “contemporary” Indonesian art for our premier national visual arts gallery. The NGA has previously held exhibitions of Islamic Indonesian imagery, with calligraphy to the fore, and textiles – both of great quality – but they are not what would be called contemporary art.

Jaklyn Babington, one of the two in-house curators of this new exhibition, was candid about the paucity of Indonesian art in the NGA collection during her talk at the associated conference. This is despite leading curators being nearby at ANU, Caroline Turner in the main, the leader with David Williams and Jim Supangkat in the selection of Indonesian work for the First Asia Pacific Triennial in Brisbane, nearly 30 years ago (with a selection trip in November 1991 in which I also took part). That selection and subsequent ones have seen a significant collection of Indonesian work held in Brisbane … But not Canberra.

The exhibition now in Canberra was obviously put together quickly – too quickly, as Babington noted them not having “long enough” (no criticism here of the curators, caught between changing administrations of the gallery).

Compare the time now put into collecting at the National Gallery Singapore, which recently acquired one of the icons of Indonesian 20th century art, Semsar Siahaan’s Olympia. This is the gallery that had the chutzpah to research and bring together the seminal show of Raden Saleh’s 19th century Indonesian paintings a year ago, and put on their current Awakenings, a serious investigation of 1960-90s art of the region including Indonesia – a show that really offers new research work into this area.

The great themes of Indonesian art need space to emerge: to find the sense of theatre, of the magic lurking in shadows, of the mischief and moral purity of the gods, of the elegance of line and style of a culture trained to see the angle of an arm or the bend of the knee as highly pondered action. The art is also permeated by an easy communal sense of coming together to make cultural objects and performance, including friends and members of villages, both urban and rural, in their creation.

Sunshower, the 2017 exhibition of Southeast Asian Art by major institutions in Tokyo, was given due space and time to work itself into its proper shape. The miraculous program the Japan Foundation instigated in Indonesia ten years ago, Kita! Japanese Artists Meet Indonesia, sent curators and artists to work with Indonesians, in a project that sang with energy and creative interest.

In 2014, there was an inspiring show of Indonesian art at the National Gallery of Victoria  in a much smaller space than the NGA has provided, but the two curators Joel Stern and Kristi Monfries, uniting sound with visual art, used their expertise to create something new.

Australia used to be considered a player in Indonesian art scenes. We were proactive; we created collaborative projects; we worked throughout the archipelago – from Timor Barat to Sumatra. In the early 2000s we fell back, just as Indonesians were starting to hit their international stride. Jim Supangkat, doyen curator, said to me around 2005: “where have you Australians gone?”

We went. Partly deterred by events, that is sure, like the Bali bombing, but also by an Australian arts fraternity probably relieved not to have to face Indonesia any more. The Australia Council’s funding of Indonesian projects sank like a stone in these years; only the Australia-Indonesia Institute keeping a frail flame alight.

This review started by talking about families, an implication of blood families. If that doesn’t work with Indonesia, what about marriages? Or even engagements? Even dating needs a commitment and, it would be hoped, some sense of a future, some idea that actions now can lead to positive outcomes later.

What about a commitment to trying something for a length of time, say a five-year plan mentality? The big institutions, and the Australia Council, could build programs of yearly collaborations; significant regular talk series; regular curatorial and “interested-others” tours of Java in particular, seeing the arts sights, visiting studios, attending the many performances that abound.

Or what about a commitment to a new Australian Cultural Centre in Yogyakarta? That was mooted some 15 years ago, and a budget put forward, but it languished with the bombing threats. Almost every other country that deals with Indonesia culturally has one of these, except us. It was to be a site for engagement, a site for linkages, for some discussions and exhibitions; not expensive; not staffed by public servants; a bit free and loose like so much in Java that makes the art scene there so beguiling.

This is about a commitment over tokenism; about the long-term; about building knowledge and about keeping delivering. If we aspire in this way, then maybe those personal links will lead to outcomes we all acknowledge as part of our inheritance.